On February 24, 2022, the Russian military invaded Ukraine bombing cities, towns, and committing atrocious war crimes. As the ongoing attack shocked and saddened people around the world, this isn’t the first time a country has been oppressed by war. We recently spoke with a senior who shared her story of survival.

Lilo Townsend is a 94-year-old German woman who lives in a retirement home in Peachtree Corners, Ga. She is kind, genuine, and authentic. We initially interviewed Lilo with the intention of researching the impact of language in seniors, but the story she shared expanded beyond linguistic research and proved to be a survival guide for those experiencing the hardships of war. In moments of reflecting on childhood memories of warfare, she often stared out the window. It was as if she was reliving the moments from her past and the feeling in the room shifted into somber tones. By the time Lilo was 18, she experienced her father being sent to a concentration camp and she escaped the Soviet reign of East Germany.

Upon realizing that the Russians had invaded Ukraine, Lilo was shocked. She couldn’t believe it was happening in the present. The vibe in the room shifted as she shared her story and advice for survival. Her story is one of grit, tenacity, and determination. It is an inspiration to future generations.

One country, two sides. East and West. This was the Germany Frau Lilo grew up in almost a century ago. She was raised during the reign of Hitler and soon after, the communist powers of the USSR. Lilo faced many hardships before she saw the metaphorical light at the end of the tunnel. Her experiences as a survivor in a war-torn country are inspirational to other warriors fighting for their futures.

Although Lilo says she didn’t have many happy memories, she explained she did have friends and they helped her throughout her childhood. For fun, they would climb mountains in Germany, including the Zugspitze. In a way, her favorite activity is a metaphor for her life. Climbing a mountain can be difficult, but once you overcome the hurdle, everything else falls into place.

Lilo’s father, Albin Joram, was a Baumeister, a builder, and an opera singer.  Her mother, Henriette, was a homemaker. Together, Lilo’s parents influenced her kind, humanitarian characteristics and helped prisoners of war. Her father participated in The Underground. The Underground was a rebellion group who opposed Hitler and the Nazi Party.

Albin once said, “If you take my friends, you take me because no human life is worth more than another.”

He later was put in a concentration camp when Frau Lilo was a child. He would later be released after the defeat of the Axis powers, but this traumatic event was only the beginning. Frau Lilo grew up in the town of Bad Elster, located on the border of Bavaria and the Czech Republic. Her hometown fell under the jurisdiction of Eastern Germany. It was taken over by Russian soldiers and from that moment on, she constantly had to look over her shoulder.

Frau Lilo recounted the moment she and her family were forced to leave their house. Soviet soldiers only gave them three hours to grab whatever they could. Lilo was lucky enough to have another place to go since her parents owned a second home, but this was  bittersweet. The day haunted her family even after the reunification of Germany. Lilo’s mother was never able to drive past that house again. 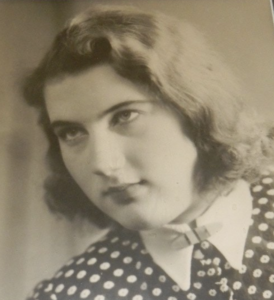 “It was too painful,” Frau Lilo said.

Everyone in East Germany was forced to learn the Russian language, including Frau Lilo. However, she refused to learn it. She made sure to erase whatever she did learn from her memory. She didn’t want to have any ties with the oppressors.

“These were dangerous times,” she murmured, “one had to be careful of what they said and to whom they said things to.”

Every day was painful under Soviet oppression. Frau Lilo shared how she couldn’t go out alone and especially at night. She explained how the Russian soldiers would harass and rape innocent women. Frau Lilo was thankful not to be one of these victims. A statement she made sure to emphasize.

One fateful day, Lilo decided it was time for a change. She knew she could not tell anybody about what she was thinking about doing. If she told the wrong person, then there was more risk that she would get caught.

In an impulsive decision, Lilo snuck on the back of a boxcar heading to West Germany. In doing so, she risked the ability to see her family and potentially being caught and sentenced to prison. Lilo hid behind furniture and whatever else could use to cover her in the boxcar. She was almost caught, but as Frau Lilo says,

“Almost, is not catching.”

Her escape and the train ride lasted around five hours total. She emerged from hiding in the boxcar to find herself in Garmisch-Partenkirchen.

Soon after, escaping East Germany, Lilo met her husband. In 1948, Frau Lilo made the long trip overseas to Maine with her husband she explained with the help of her daughter. The couple was married for 60 years becoming the parents of a son and daughter. Although she was in a foreign country surrounded by a different language, she had the small comfort of already having an understanding of English. Since she had grown up in the international town of Bad Elster, she had been exposed to many different languages including English and French.

She was happy in Maine, she says with a smile on her face while staring at her favorite painting, which is a rendering of her hometown with the mountains in the background. Lilo says, in America, the people were nicer and she had the freedom to speak without worrying about what she said or feeling the need to watch her back in fear.

Today, she enjoys retirement in Peachtree Corners, Georgia. Her daughter and son live nearby and often visit Frau Lilo. Everyday she enjoys meals with neighbors while embracing her family, friends, and community that surrounds her. 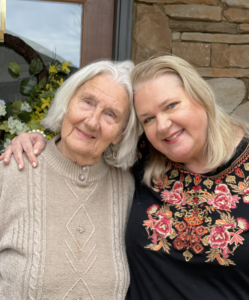 “It feels very good here,” Lilo says. “The employees are very nice, the people who live here are very pleasant, there is always something to do here. You never feel alone.”

Throughout the interviewing process, we made some clear observations about Frau Lilo. Upon reflecting on more painful memories, she looked out the window. On the other hand, when recalling more joyful moments in her life, her attention would focus on the painting of her hometown.

When it came to memory, her childhood experiences were prominent, well detailed, and laced with heavy emotions. While speaking about her life after leaving Germany, her recollection was less defined and focused more on her feelings of happiness and freedom. Oftentimes she would look towards her daughter, who was present throughout the interview, for assistance on recalling dates, years, and timeframes.

We attempted to conduct the interview in German by asking questions in German, but Frau Lilo responded in English. This could possibly be because we are not native German speakers and the interview was better understood in English.

We do have many more questions involving language barriers, psychology, and being a woman during that time. Other questions we hope to ask include: What happened when Lilo visited Germany? What were her initial thoughts on visiting Germany after reunification? What was freedom like in West Germany as opposed to the small freedoms in the East? How was her assimilation in Maine, Chicago, Georgia, Michigan, and Pennsylvania as a German in America after the end of WWII?

Despite all our questions, there is one thing we know for certain. Frau Lilo is a courageous and resilient woman. Time and time again she was forced to confront difficult obstacles in her life, but in the end, she came out triumphant and stronger than ever.

Even during the bleakest moments of her life, there was light at the end of the tunnel, and she was destined to find it. At the end of the day, she likes to relax while staring at her favorite painting. She closes her eyes and imagines the wind tickling her face, the sounds of the trickling brook reach her ears, and the feeling of peace engulfs her. The painting is not just a piece of art that she cherishes, but it is also a symbol of her resilience and perseverance. It’s saying, “look at where I am.”

In spite of all her hardships, she is still a very happy and joyful woman. As a testament to her character, Frau Lilo ends the interview by saying that even at the age of 94,

“I would still climb another mountain.”