The year was 1941, and Wayne Dahlgren was walking along Broadway in Rockford, Illinois. Music played softly on the sound system overhead. There was peace in the air, but as he moved through the street, the music suddenly cut off, and a disembodied voice emerged in its place announcing,

“Pearl Harbor has been bombed and the United States is officially at war with Japan.”

His heart sank. Wayne and his family knew what this meant – draft letters.

The Dahlgrens knew it was only a matter of time with five kids in the family. Every day, they waited for those brown envelopes to slip into their mail. Not long after the world-changing announcement, Wayne’s oldest brother, Marshall, was called to service.

“We knew what was going to happen,” he recalls. “You just knew it, and yet when it did happen, it was very, very sad.” 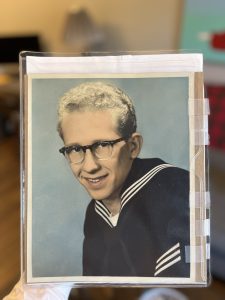 The years that followed were troubling as they waited for good news or any news for that matter. With Marshall having been drafted and Wayne’s other brother having enlisted into the Air Force, having peace of mind became a rare commodity in the Dahlgren home.

“My mother was always worried,” Wayne described. “Everybody cried a lot, hoping and praying that they would come back.”

The fear of a loved one dying in the war was valid. Many of those who were drafted risked being killed. Wayne remembers walking through his town and seeing commemorative plaques hanging in the windows of the homes that lined the streets. The plaques recognized the slain soldier who had lived in that respective dwelling. The melancholy contributed to the anxieties and fears of losing his siblings.

Six long years later in December 1947, Wayne’s dad sat him down to share the news Wayne had been waiting to hear.

“Marshall is alive and healthy and everything is fine. He’s coming home.”

Wayne rejoiced and immediately asked all of his eagerly anticipated questions learning that Marshall would be back just in time for their family Christmas Party.

To celebrate his brother’s return, Wayne’s family decided to make that Christmas Party one of the biggest and best to come. His mother cooked all of their favorite dishes stemming from their Swedish heritage and invited all of their family members, neighbors, and friends.

December 25, 1947, arrived and so did Wayne’s brother. As Marshall walked into the celebration, Wayne ran to him.

“I rushed up and grabbed him and started to hug him and tell them how happy I was,” Wayne joyfully remembers. “I told him about all the plans that I had for the two of us, about what we were going to do and get together and have some fun.” Nearly 75 years later, Wayne still reflects on this moment as being one of the best Christmases ever. This joyous memory is one he loves to share. Today, Wayne looks forward to the best part of the holiday season – spending Christmas with his family.