People know their great-grandparents as the ones who can bake delicious treats and tell stories about the people their parents were. I grew up visiting my great-grandmother every summer and enjoyed watching her cook amazing food in the kitchen and converse with friends from church.

I watched fireworks with her while and ate dessert while watching the night go dark. No matter how much time we spent together, I never expected my great-grandmother would’ve helped to shift the needle for her career and community.

My great-grandmother, Ann Walker, never meant to find herself in a journalism career. She got her start in 1949 when her friend asked her to write an editorial piece for his magazine, the Sentinel. She did not major in journalism but she had written pieces in high school and college, so she wrote the editorial for him.

A year later he asked her if she would like her own column, Party Line. The column would tell stories of women’s activities happening in the community. She and the women in her community were excited because at that time, nobody was telling stories for African Americans. This provided her an opportunity to represent a new audience and help her establish her career in journalism and media. Later in my great-grandmother’s career, she went to Little Rock Arkansas for the People’s National Conference where former President Jimmy Carter spoke. At this conference, Carter was still a presidential candidate. He spoke about several issues he would address if elected President such as reforming prison and crime. Two years passed after that conference, and Ann moved onto television where she worked as the Director of Community Services. She was the only woman in the country serving in a position like this during this time. Jimmy Carter was at the station for a panel interview, and a male reporter from the Associated Press was slated to be a part of the panel.

At the last minute, the reporter tried to renegotiate his rate on his contract and because of this, the station chose to let go of him. Instead, they asked my great-grandmother to step up and fill his spot since she always knew what was going on in the community.

While other reporters were focused on Hubert Humphrey, Ann Walker asked about the topics Jimmy Carter spoke about at the Little Rock conference. At the end of the panel, Carter said, “This little lady is the only one who asks intelligent questions.”

Shortly after, Jimmy Carter was elected President of the United States and this changed the trajectory of Ann Walker’s journalism career.

After returning home from a community trip in Africa, Walker was informed by her husband that the White House had called. She laughed it off as a joke. Her husband reassured her it wasn’t, so she returned the call the next day.

When she spoke to the White House, they asked if she could come to Washington D.C. She journeyed to the Capitol that Friday and met the team. A week later, she started her new job.

She worked as head of media for the Poverty Agency of the government. She worked in the White House with Jimmy Carter until the end of his term in 1981. She then worked with Ronald Reagan for seven months until he found a replacement.

To this day, it is not known who got Ann Walker to the White House. None of the democratic organizations in her community nominated her for the position, so it is assumed Jimmy Carter remembered her from the panel interview and asked for her personally.

Not only did Ann Walker shift the needle for journalism in Columbus, Ohio, but she also served in her community. She served on many boards including Planned Parenthood, the Franklin County Committee for Drugs and Alcohol, the Young Women’s Christian Organization, and the Columbus Zoo. 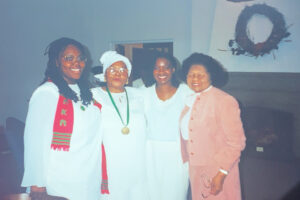 While her work serving boards helped to strengthen her community, her longest-running project is her work with Bethany Presbyterian Church. In 2005, Ann Walker began to recognize the need to feed the unhoused in her community. She and a team at Bethany decided they would start a lunch program to help combat this. They started with soup, dessert, and a drink but they quickly moved on to a full meal. They set the table with tablecloths in their church every Saturday and fed the homeless and the hungry. The organization also provides a clothing ministry, haircuts, and books for children.

The Covid-19 pandemic did not stop their work, while they could not set the table for people anymore they still provided a boxed lunch every Saturday. My great-grandmother’s work with the community inspired two local churches to start a monthly food program to also help feed the homeless.

Through all of this my great-grandmother remains very humble about her accomplishments. Through her work in Columbus, Ohio she became the first black woman at her radio station, the first black woman to report on Ohio legislature, she was inducted into the Ohio Women’s Hall of Fame, and her image was placed on a bridge for her contributions.

In 2021, a building of 130+ office spaces was dedicated to her for the impact she made on the community. At the bottom of the building sits the Ann Walker Plaza. The inside of the building is the home of Black-owned business on the bottom floors.

The biggest advice Walker has is, “If a door opens, you cannot walk through without taking someone with you.”

If she ever has a contact or an opportunity she will always share it. Her selflessness for giving back to her community is the reason her story is so uplifting.

For the last twenty years of my life, a history maker has been sitting in my midst and I never knew it. She changed the lives for many in her community and beyond. As someone wanting to pursue a career in media it is inspiring to know someone who has made a tremendous impact in the industry has left a legacy for me to follow. It motivates me to follow in her footsteps, not only with her media career but with her passion to serve the community she is a part of.